From Sheep Barn to Ski Shop

“The building looked pretty much the same on the inside as it did on the outside. They poured a concrete floor, and if I’m not mistaken there was a fireplace or wood stove,” recalls Peter Gibson, who grew up skiing at Blue Mountain and later ran his own ski shop in Collingwood for 33 years. Gibson remembers buying his first pair of “really good” ski boots at the original ski shop. “It was pretty bare bones, but there was nobody else around selling equipment at that time. You had to go to Toronto or maybe Barrie.” 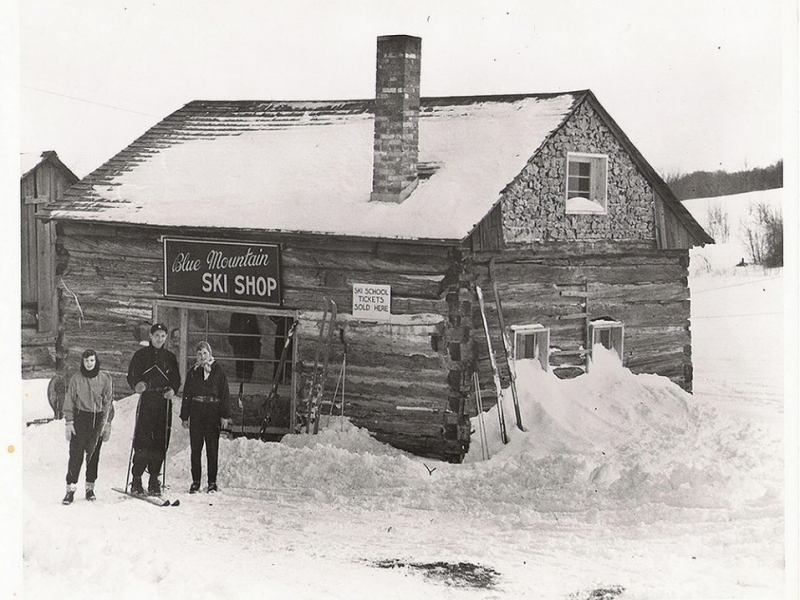 In 1941, Jozo Weider had started clearing trails by hand on a farm the family owned at the base of the Escarpment (now the north end of Blue Mountain). By 1948, Weider had purchased another 150-acre farm to the south and began developing that area as the Apple Bowl. It was on this second farm property that the sheep shed was transformed into a ski shop in the winter months; in the fall it was used to store apples picked from the orchard where the Apple Bowl run is today.

In addition to the sheep barn-cum ski shop, a larger barn on the property was turned into “The Ski Barn,” the hill’s primary day lodge at the south end of Blue Mountain. Weider later sold the lodge in 1955, using the money to purchase a poma lift to replace the original sleds (drawn by a cable powered by an old truck engine) that had ferried skiers up the hill on the Schuss and Granny runs.

None of those original farm buildings remain, but photos like this are a reminder of how one man’s dream and determination built what is today one of the largest ski resorts in Ontario.

Written by Janet Lees – On The Bay Magazine

Julie Card's Out and About